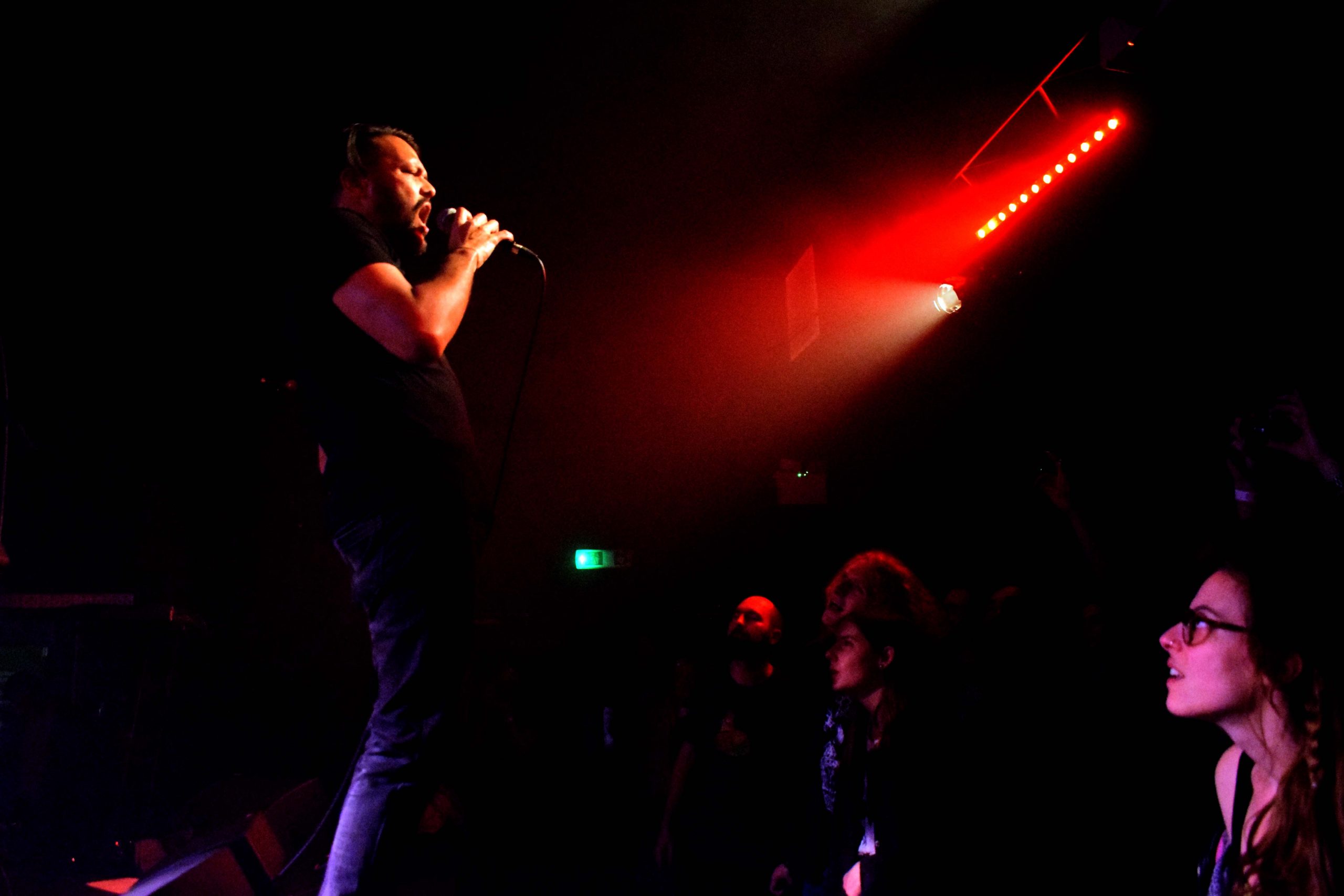 We are once again overjoyed to be participating in Independent Venue Week in 2023, where we’ll be welcoming a swathe of truly brilliant artists for a whole week dedicated to the joy of live music. Our first IVW with people in the building last year went down an absolute treat, with particular highlights from headliners Melt Yourself Down and Audiobooks, and we’d hazard a guess that this year might turn out even better…

Liverpool rockers The Mysterines bring-their huge-sounding grunge rock anthems to the FY stage slap-bang in the middle of the week, returning to Future Yard on Thursday of IVW (2nd Feb). A double headliner delight precedes this with Thus Love and firm FY favourites M(h)aol bringing their own unique flashes of post-punk to the stage on 31st Jan, before indie-heavyweights English Teacher treat us to their alt-rock sensibilities on 1st Feb. Two weekends of sonic excellence bookend the week, the Luxembourg-based, 90s inspired, DIY grunge duo Francis of Delirium kicking things off on Friday 27th Jan, followed by White Flowers’ floral arrangement of dream-pop and post-punk on Sat 28th Jan (brought to FY by Happy Daze). Manc Punk heroes Loose Articles join us on Friday 3rd Feb on their Kick Like a Girl Tour and the Independent Venue Week Closing Party brings a whole host of artists together on Saturday 4th Feb, post-punk agitators LIFE top a bill also featuring the awe-inspiring live show of Mandy, Indiana + local stars Two Blinks, I Love You, SLAP RASH and Louie Miles. James Yorkston, Nina Persson and The Second Hand Orchestra also return on 5th Feb for a full-band show to round off our celebrations.

Tickets for all show are on sale now.

Happy Daze present White Flowers on the FY stage on Saturday 28th January. Blossoming from Preston, White Flowers have delivered a 21st century update on dreampop and post-punk. Working with Doves’ Jez Williams to finesse their sound, Joey Cobb and Katie Drew released their debut album “Day By Day” which creates a crystalline atmosphere mixed with ethereal vocals that can be described as a revivalism of shoegaze that saw its day in the ’80s and ’90s.

IVW bring three supremely talented groups to our stage for the kind of exhilarating live show that is the essence of the week.

THUS LOVE are a trio from Battleboro, Vermont, whose debut album Memorial (Captured Tracks) is a celebration of their bond as much as their retro-futuristic aesthetic. It’s indie with a flash of Marr-esque guitars; post-punk with the strut of 80s New Wave. DIY is an ethos that reflects not only their musical vision but their very existence as three self-identifying trans artists.

M(h)aol are firm Future Yard favourites. They were part of our fabric even before playing on our stage as part of our annual Future Now weekender in August 2022, where they delivered the set of the weekend. But it’s not just us who are fans of the Dubliners’ bass-driven punk scree. “A rumbling cacophony of post-punk noise designed to dismantle the misconception that gender is binary,” said Get In Her Ears about 2020’s Gender Studies EP (Tulle Records).

Leeds indie heavyweights English Teacher take our stage on Wednesday. The quartet join us following the release of their debut EP Polyawkward in the spring, a collection of tracks steeped in alt-rock sensibilities and politically-charged lyricism. 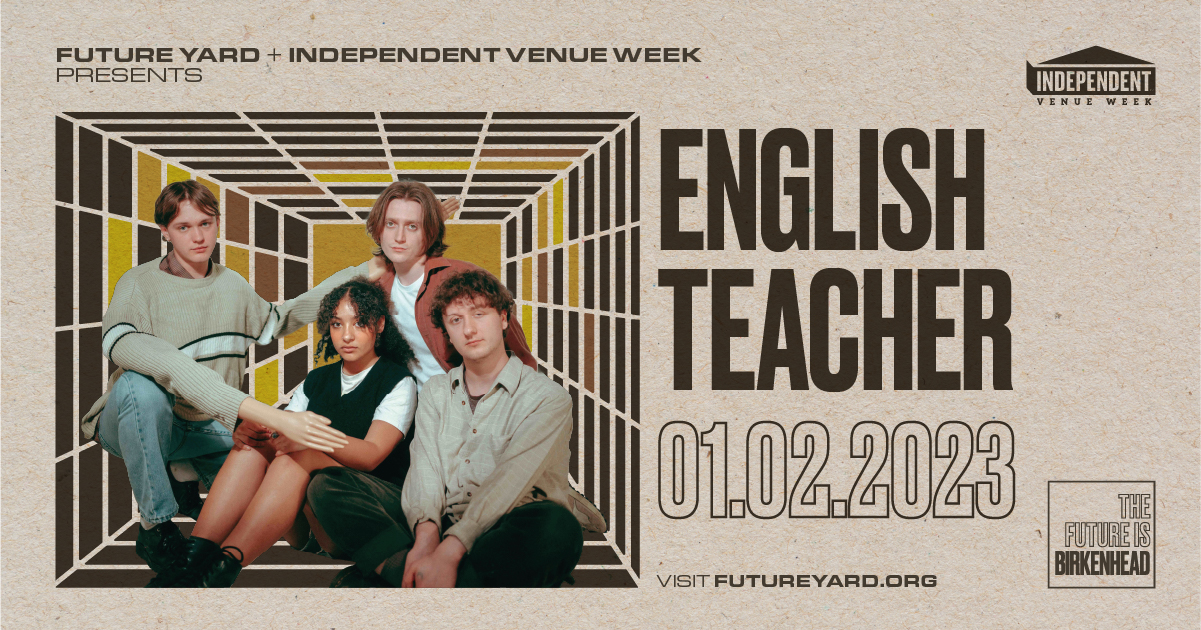 The Mysterines join us on their ascendancy to greatness on Thursday of IVW. The Liverpool alt-rock quartet set the live room alight with their performance last summer, headlining the first ever Festevol at Future Yard, now they join us in 2023 following the release of their critically-acclaimed 2022 debut album, ‘Reeling’.

Mancunian punk outfit Loose Articles join us for their Kick Like A Girl tour, when they bring a special show to our stage as part of Independent Venue Week. Specialising in discordant, hypnotic repetition, tales of boozy nights out, and radical politics, the punk quartet’s music speaks to all those determined to get through the age of austerity with tongue in cheek, pint in hand, and two feet firmly on the dancefloor.

We’re throwing a huge party to celebrate this special week, headlined by Hull’s post-punk agitators LIFE, who are touring grassroots venues as part of IVW this year. They’ll be joined by heavy-hitting experimental punks (and Future Yard faves) Mandy, Indiana – plus a full line-up of local stars Two Blinks, I Love You, SLAP RASH + Louie Miles. 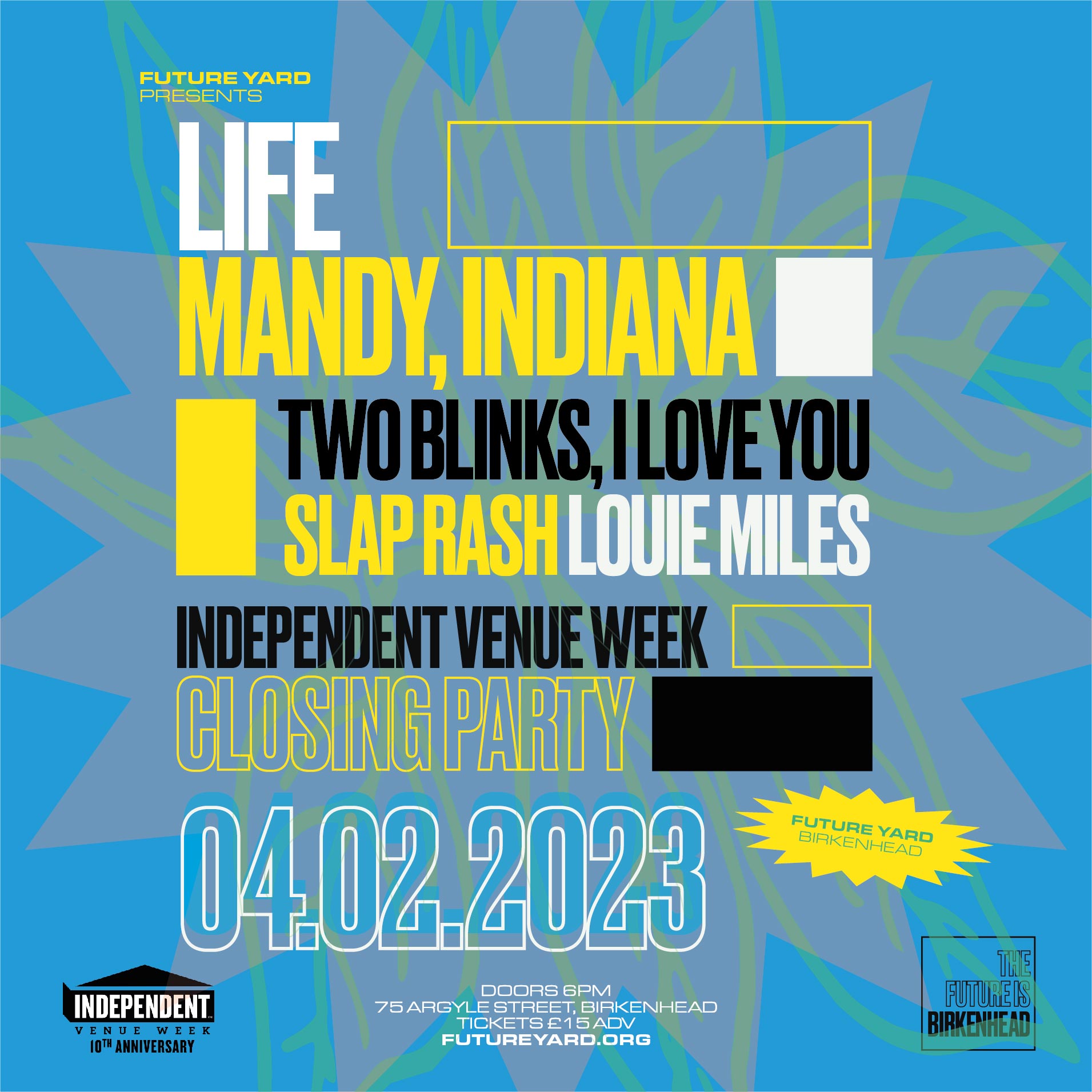 We’ll be welcoming the full outfit of James Yorkston, Nina Persson and The Second Hand Orchestra back to Future Yard for a full band show, which rounds off our celebrations for Independent Venue Week 2023. The show comes off the back of the release of the collective’s new album, The Great White Sea Eagle, which lands on 13th January via Domino Records. 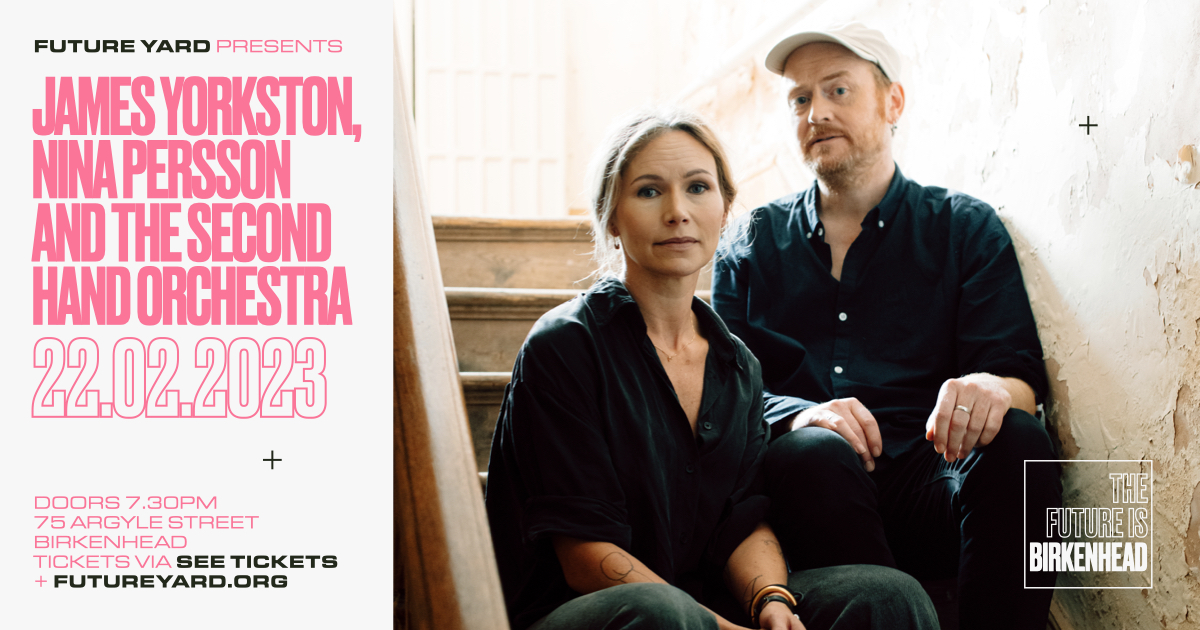 Celebrating the spirit of independence + the culture of live music

Independent Venue Week is a seven-day celebration of music venues around the country and a nod to the people that own, run and work in them, week in, week out.

These venues give artists their first experience of playing live in front of an audience. They give fans somewhere to get up close to artists that one day, may well be playing stadiums and festival main stages. They also provide those wanting a career in music, off the stage, the chance to learn their craft up close in a small venue.

Independent Venue Week is unique in that it is a nationwide initiative with a completely local feel. 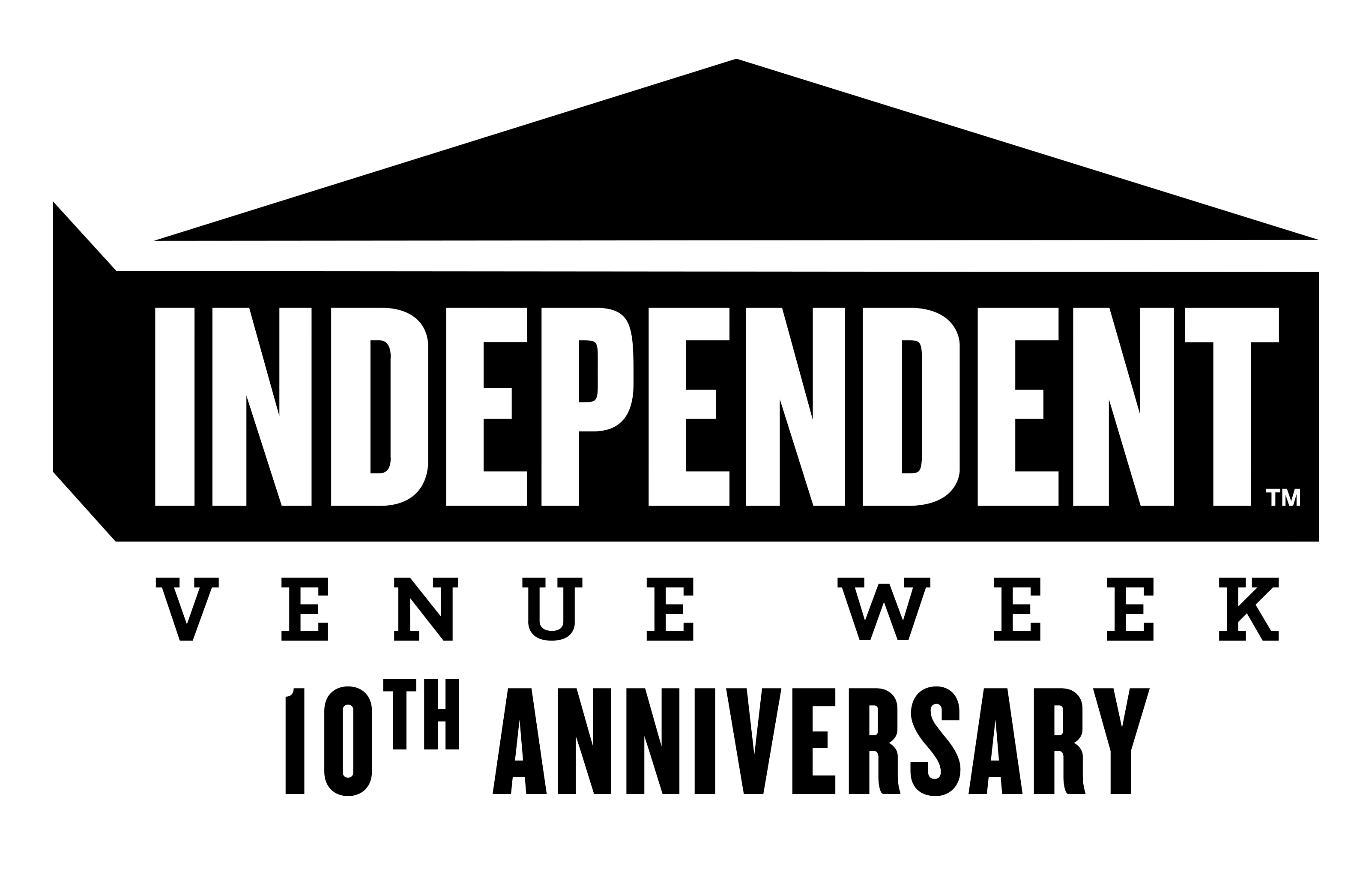