We’re incredibly happy to announce our headliners for this year’s festival: Marie Davidson & L’Œil Nu (Friday) and Melt Yourself Down (Saturday) are leading the charge on what is sure to be an incredible party. Québecoise dancefloor maestro Marie Davidson has explored the many facets of the club experience across her two records on Ninja Tune, the latest (Renegade Breakdown) with longtime collaborators Pierre Guerineau and Asaël R. Robitaille as L’Œil Nu. Founded by sax innovator Pete Wareham and fronted by lead vocalist Kush Gaya, Melt Yourself Down play into a great tradition of British insurgents that spans decades and genres, from the Sex Pistols to Young Fathers. Their thundering approach has seen them leap to Decca Records for their latest album (2020’s 100% YES) after two searing albums on The Leaf Label. All the while they’ve left a trail of awe and wonder in the wake of their live performances.

DJ and tastemaker Tom Ravenscroft will also be joining us for Future Now on the night, providing us with a DJ set on Saturday that gives a flavour of his genre-hopping, otherworldly music taste. We’re also delighted to be welcoming back the force of nature that is Scalping, who played our festival in 2019. Our brains have never quite been the same since that performance. The Bristol-based four-piece evoke the smoke-filled dancefloors of underground clubs along with the energy of crowd-filled D.I.Y. punk venues, melding the industrial throb of techno with feedback-driven guitars of post-punk.

East London’s avant-punk queen Nuha Ruby Ra joins us on the Friday, having spent the last year or so cultivating a dedicated following and racking up an impressive catalogue of collaborators from around the world. She’s now set to release her debut EP How To Move on Brace Yourself Records. Based out of Leeds, minimalist rock mavens Yard Act have won a growing fanbase with their coruscating, narrative driven, spoken word dance-punk. They come to Future Now on the Saturday night, with all of their releases to date (to be found on the self-released EP Dark Days) having bothered the 6 Music playlists and wormed their way deep inside your head.

Stores and Samurai Kip represent the first wave of local artists who will be aiding and abetting proceedings over the weekend, and they’re amongst the best out there. Cowboys of forgotten seaside towns across the North, Stores are primed and waiting to capture your hearts when they unleash their moreish kitchen sink dramas upon you. South Liverpool cosmic jazzers Samurai Kip are masters of the groove, and their fleet-footed dynamism is the perfect addition to an already fearsome live bill. 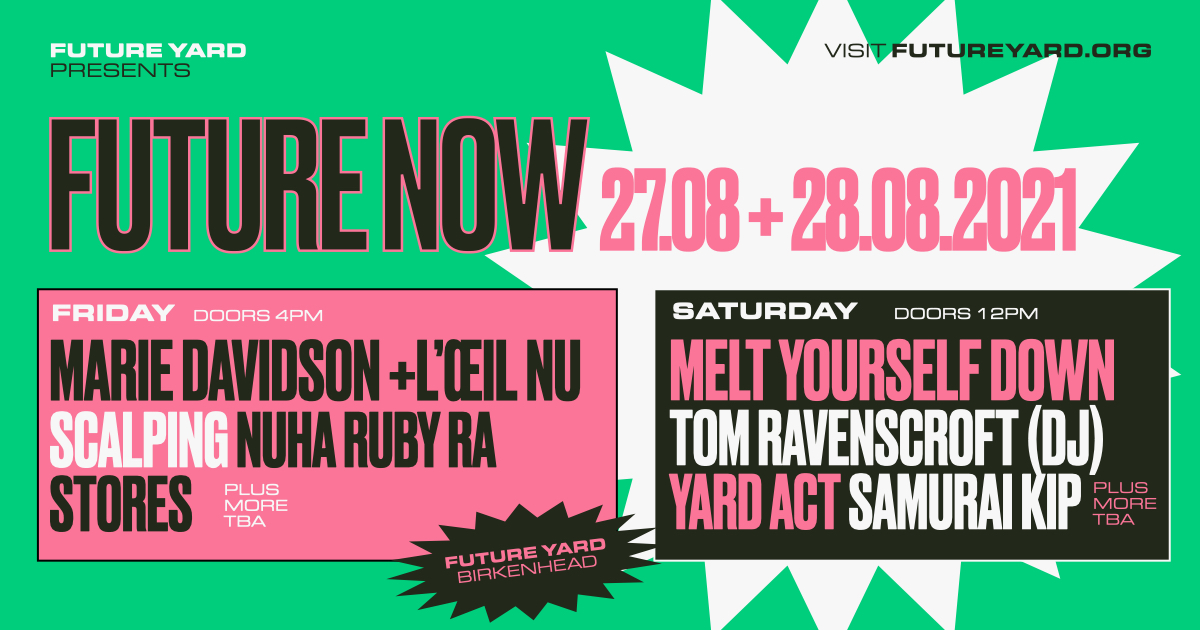 Taking place on August Bank Holiday weekend, two years on from our festival when we launched the Future Yard name, we’re hosting a massive celebration of the kind of music we’re looking forward to bringing to Birkenhead in the months and years to come. The full programme of live performances and DJs will be split across our indoor live room and our brand new outdoor garden space. This first line-up announcement is a signal of our intent to bring the best, most important new music to Birkenhead.

We hope to make Future Now an annual celebration, where we bring together some of the most exciting acts from across the world to play for you, our audience. Tickets are on sale now, with options available for Friday and Saturday days, as well as a weekend option. Performances start at 5pm on Friday 27th August, running until 1am. Proceedings get started at 12pm on Saturday 28th August, running until 4am.

Further additions to the line-up will be announced later in the summer, as we build up to a massive celebration in our new home, soundtracked by some of the most exciting music around right now. 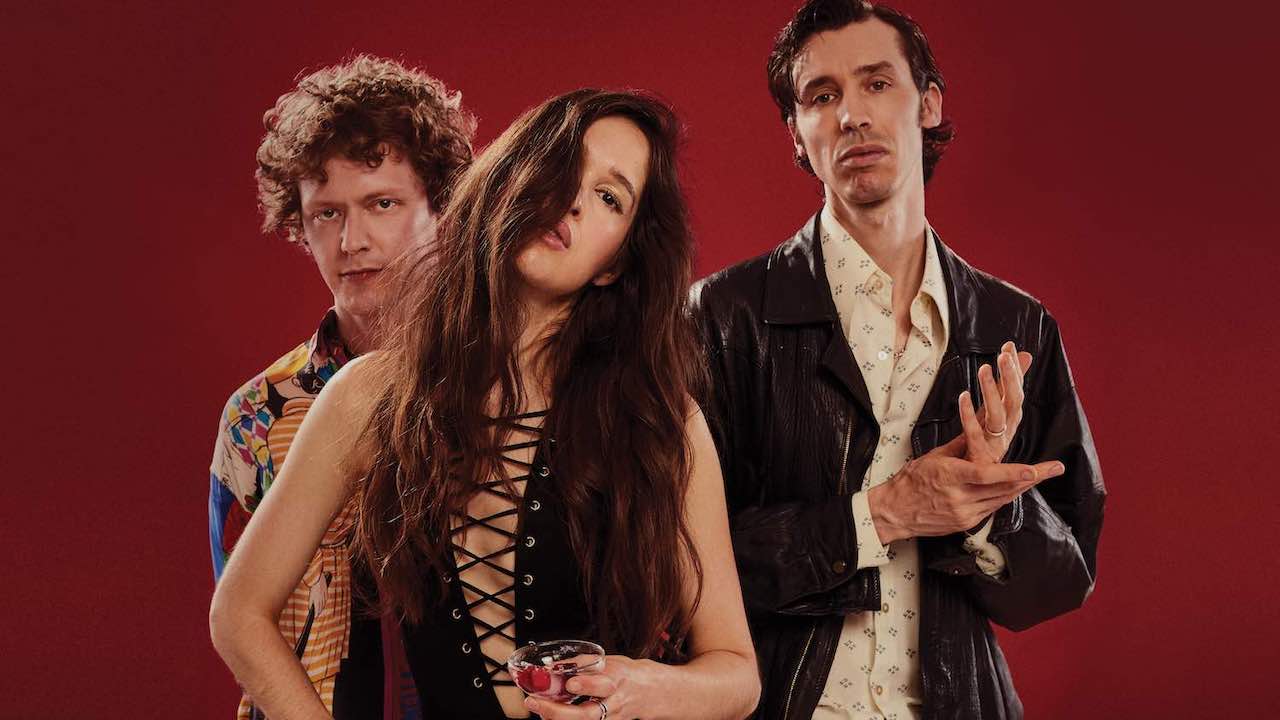 A trio of old friends and long-time musical collaborators, Marie Davidson, Pierre Guerineau and Asaël R. Robitaille share many things in common (with the former two also being married to one another, and writing and performing together as the group Essaie Pas.) Each of them has made waves in electronic and experimental corners of the music industry; often working together, for labels like DFA, Cititrax, Holodeck, Orange Milk and Mind Records. But they’re also devotees of classic pop songwriting, and they created Marie Davidson & L’Œil Nu to celebrate and reimagine those shared musical touchstones.

If there’s a mood that encapsulates L’Œil Nu, it’s the one to be found at 3am, after a long night of drinks, when it’s time to start putting on the classics. This, for Marie, Pierre and Asaël, means Fleetwood Mac, Rush or soundtracks from French cinema, and it was in one such moment that the germ of the idea for L’Œil Nu was planted. Later evolving and growing to encompass something bigger: to be a band, to write songs and to approach music from a pop perspective.

MELT YOURSELF DOWN (Saturday) 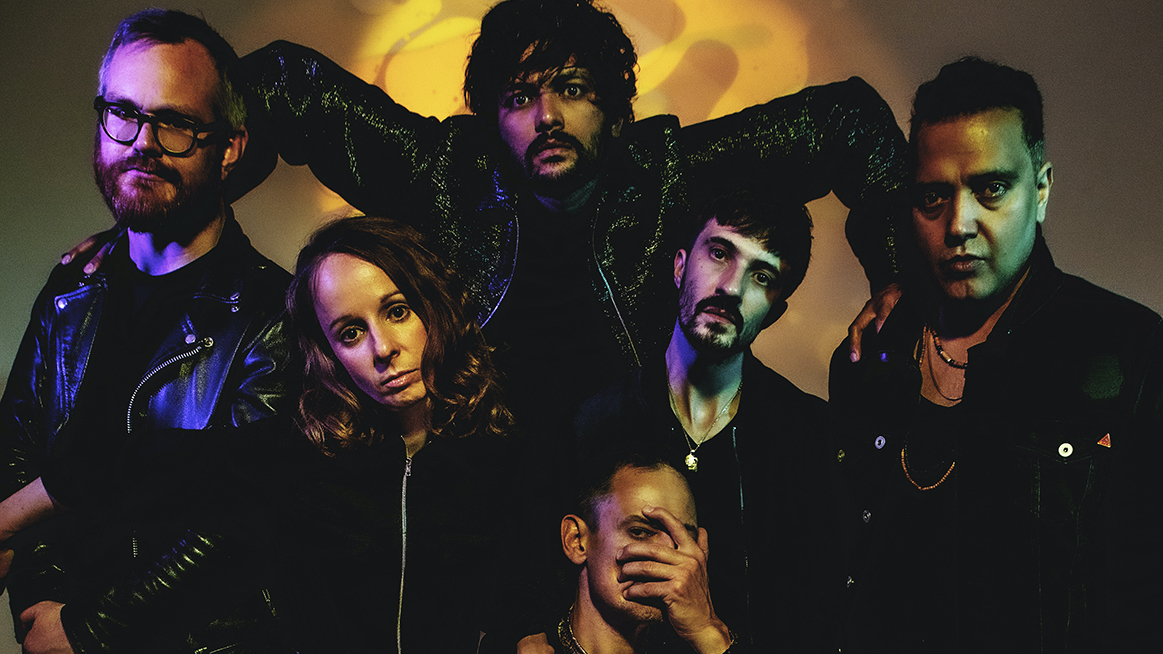 Melt Yourself Down are one of the most innovative collectives in the UK today. They play into a great tradition of British insurgents that spans decades and genres, from the Sex Pistols to Radiohead, and from Kate Tempest to Young Fathers. Yet the band’s lineage is also connected to jazz’s rich history of sticking a middle finger to The Man. “Jazz was the wild, dirty music of the 20s, 30s,” says Kush. “It was not a sit down, polite, experience.” Pete adds: “I love jazz best when it feels dangerous.” Addressing the current cultural restlessness, the group are unafraid to confront issues around identity and what it means to be British today.

The desire to create new sonic pathways is an integral philosophy to the band, whose two critically-lauded albums to date have alchemised influences from noisy no wave to nubian rhythms to create an eclectic, high energy and pan-global kind of punk rock. Having firmly cemented themselves at the forefront of today’s musical innovators, the band have reimagined themselves through their latest work and created a bruising re-up of their signature sound with added synths, anthems and epic joyrides.

Tom Ravenscroft introduces quality new music to listeners around the globe via a number of projects including his regular Friday night 9pm show and Recommends show on BBC Radio 6 Music. Showcasing music hand picked from as many far flung places a possible, a mish mash of sounds painstakingly put together into a coherent mix.

Having started out DJing DnB and jungle parties in Sheffield while at university, he has gone on to play his unique selection of tunes, cultivated from nearly 10 years of building his weekly radio show, at all the major music festivals – Glastonbury, Field Day, Worldwide, ADE, Soundcrash, Greenman, Latitude – as well as parties up and down the country.

Cutting her teeth in various musical projects and art collectives, Nuha Ruby Ra is a performance powerhouse sharply focused on her own artistic vision. Regardless of who joins her in the studio or on stage, it’s a beast tamed and conducted by her. Equally adept to presenting these sermons with a chaotic, pulsating seven or eight person live band as she is stripping it right back to herself, the music is something that can be effortlessly moluded to suit her mood. Constantly evolving and always adapting.

Nuha has performed alongside the likes of Bo Ningen, Uncanny Valley, Charlie Boyer and more, and appeared on recordings by Flamingods and Warmduscher. In the short time she’s been playing these tracks she’s amassed support slots with Fat White Family, Surfbort, Amyl and the Sniffers, Bambara, Japanese Television and has recently returned from a 12-date tour with Snapped Ankles.

Yard Act formed in Leeds in September 2019 when Ryan Needham found himself temporarily living in James Smith’s spare bedroom. The two had been pub associates for years, but their new living circumstances served as a catalyst for their friendship and creative partnership which saw them fuse James’ interest in spoken word with Ryan’s primitive proto-punk demos using an ancient drum machine and borrowed bass guitar.

They released their first material in March 2020, coinciding with you-know-what, and with just three singles (The Trapper’s Pelts, Fixer Upper and Peanuts) and three gigs to date, Yard Act have staked out a territory all their own. Setting up their own imprint Zen F.C. they released their debut 7” which can now only be found for exorbitant sums on Discogs, they’ve scored two 6 music playlists, and they’ve won a growing fanbase with their coruscating, narrative driven, spoken word dance-punk. Yard Act have most definitely marked our cards as one of UK’s most exciting prospects.

A collective whose mythology was born practically before they were even conceived, Stores are cowboys of forgotten seaside towns across the North. They inhabit a chaotic world filled with tales of drinking moonshine with beekeepers and running from knife fights in Russia to skinny dipping in freezing Wirral waters on full moon lit eves. Despite their disparate set of distinctly Northern accents they are brought together through a youthful search for adventure in everyday banality.

Finding their name from the bold stencilled text of the industrial dockside storage units that they pass daily, Stores are the true spirit of Merseyside’s musical underground, finding influence in both the beautiful and decaying. A frank recollection of feelings, lost and found; Stores channel their spirit through dramatic, extraterrestrial kitchen sink drama and kaleidoscopic noise.

South Liverpool’s finest, Samurai Kip have been making quite the name for themselves over the last few years with a sound quite unlike any other. Encompassing elements of West Coast psychedelia and marrying this up with jazz elements, they offer up a cosmic ode which is as much to Sun Ra as it is to The Seeds.