Future Yard and Sister Midnight are delighted to present a live show from Goat Girl, in support of the Collective Futures event. The show is a fundraiser for Future Yard’s Neighbourhood Fund, providing free tickets and opportunities to access music to people in the immediate community around Future Yard in Birkenhead. The show serves as an afterparty to the daytime Collective Futures symposium, celebrating and connecting community music venues.

The award-winning quartet graduated through the grassroots open mic and music scene of South London, making particular use of the Brixton Windmill as a sounding board, moving on to bigger and bigger stages and channelling their unique warped punk music into two albums on legendary British label Rough Trade. They are closely aligned with Sister Midnight (guitarist Lottie Pendlebury is a director of Sister Midnight), the South East London music space that was formerly housed in Deptford, and will soon be opening Lewisham’s first community-owned live music venue.

The show will follow on from the daytime Collective Futures symposium, and will feature incredible support from Merseyside-based artists Trout (groove-laden angsty grunge) and Thalia’s Grace (distortion-heavy alt. rock).

Goat Girl originated in 2015, when the four came together through their love of music and like-minded attitudes, continually crossing paths at a number of gigs and open mic nights across South London. The quartet’s combined talents and enthusiasm resulted in a uniquely defiant sound with conscious lyricism, all of which wasted no time in pricking the ears of legendary British record label Rough Trade. Using the Brixton Windmill as a sounding board, the warped, country-tinged sound of their debut album Goat Girl engulfed the sonic and social landscape that the band were surrounded by.

Goat Girl’s sophomore album, On All Fours, showcases the pinnacle of the band’s collaborative artistry, which acts as a catalyst for fresh sonic territory. Goat Girl’s frequent use of sci-fi synthesisers, off-beat chord progressions, analogue drums machines, diverse vocal styles and distinct, gritty guitars fuse a musical language that expresses both former characteristics and newer developments of the band’s sound and vision. 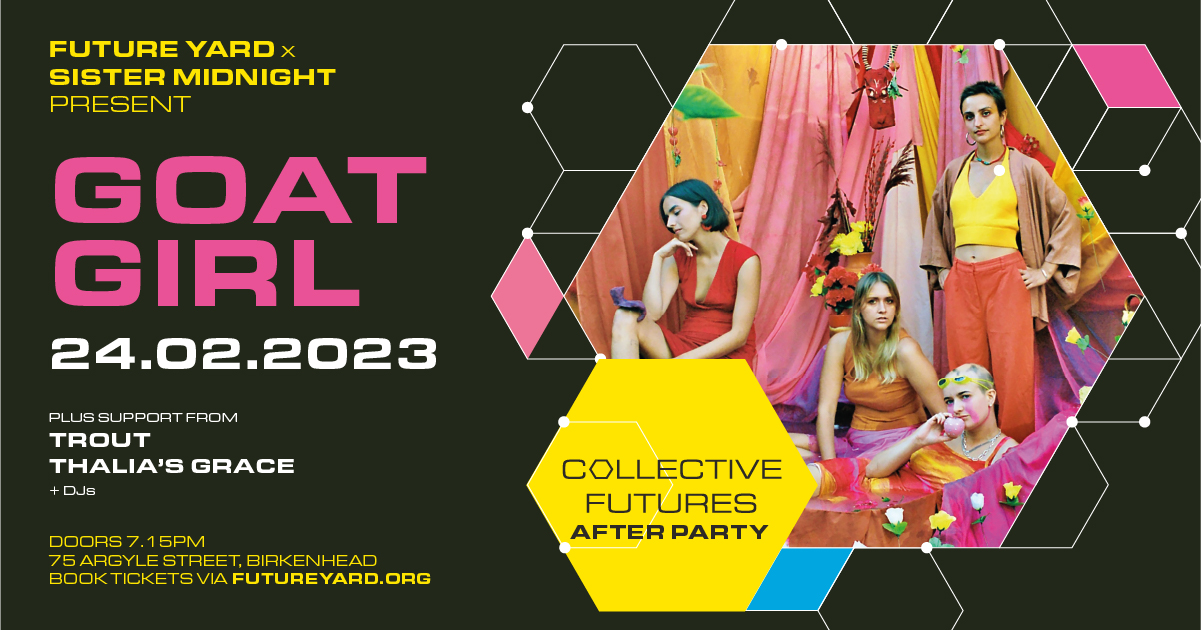 Future Yard x Sister Midnight present
Goat Girl
Collective Futures Afterparty + FY Neighbourhood Programme fundraiser
+ Trout
+ Thalia’s Grace
Friday 24th February 2023
75 Argyle Street
Doors 7.00pm
Tickets £15 advance
There will be a number of tickets for the show allocated through Future Yard’s Neighbourhood Programme, free of charge for people who are unable to afford it. These will be allocated on the day of the event to anyone attending the symposium who would like to claim one.
#thefutureisbirkenhead