We’re throwing a party to round off our busy programme for Independent Venue Week 2022, and we’re stoked to be joined by some incredible artists for it. audiobooks concocted some of the most hypnotising sounds of 2021 on their album Astro Tough, and they headline this buzzing party. Slinky trio All We Are return to our stage after their delicious grooves appeared on one of our live streamed shows in 2021; and dreamy quartet Bleach Lab make their long-awaited Future Yard debut, bringing their shimmering, Mazzy Star-indebted glow.

Yammerer bring a vein-popping intensity to their performances, something that is only matched by the juddering stomp of their grot-punk sound. iamkyami only deals in positive vibes, their glitch pop positively dripping with punk attitude. And Remée‘s futuristic RnB is the sound of an artist growing into her considerable talent with extreme style.

Tickets for this bumper show are on sale now. 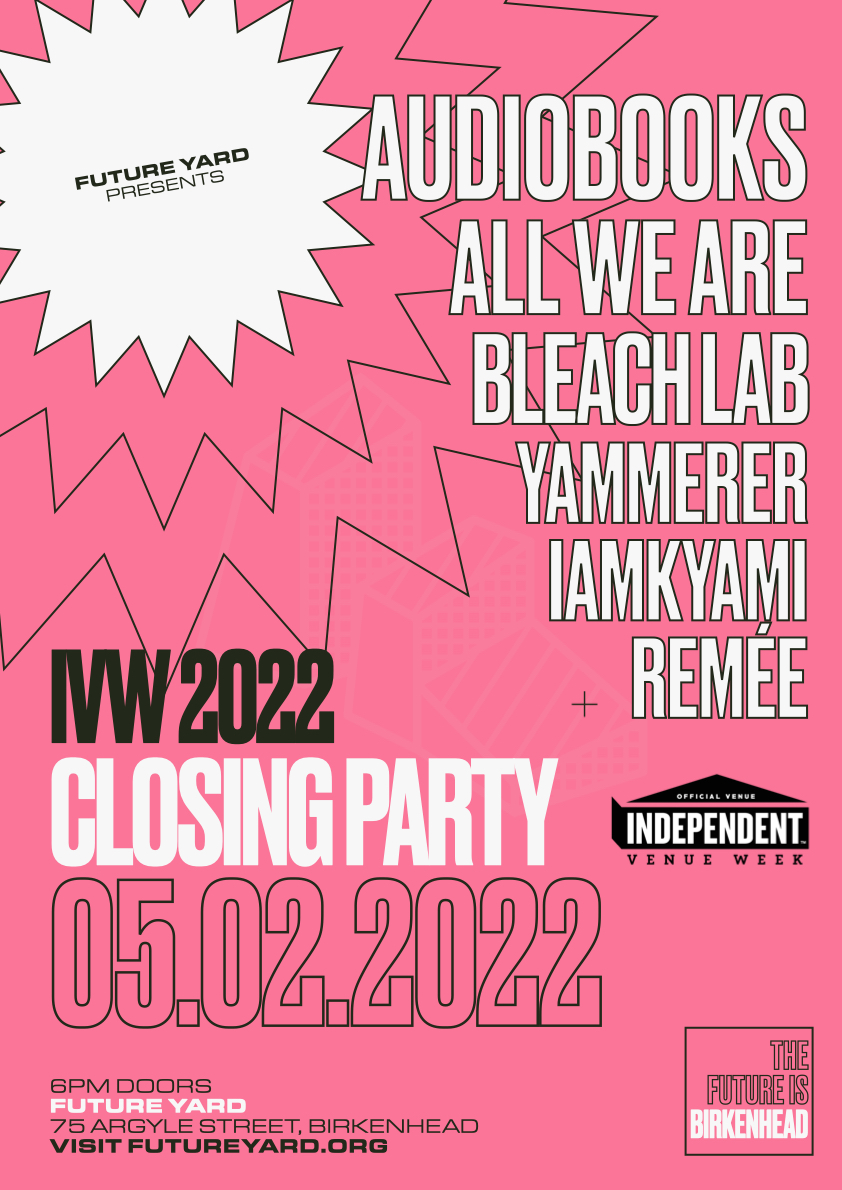 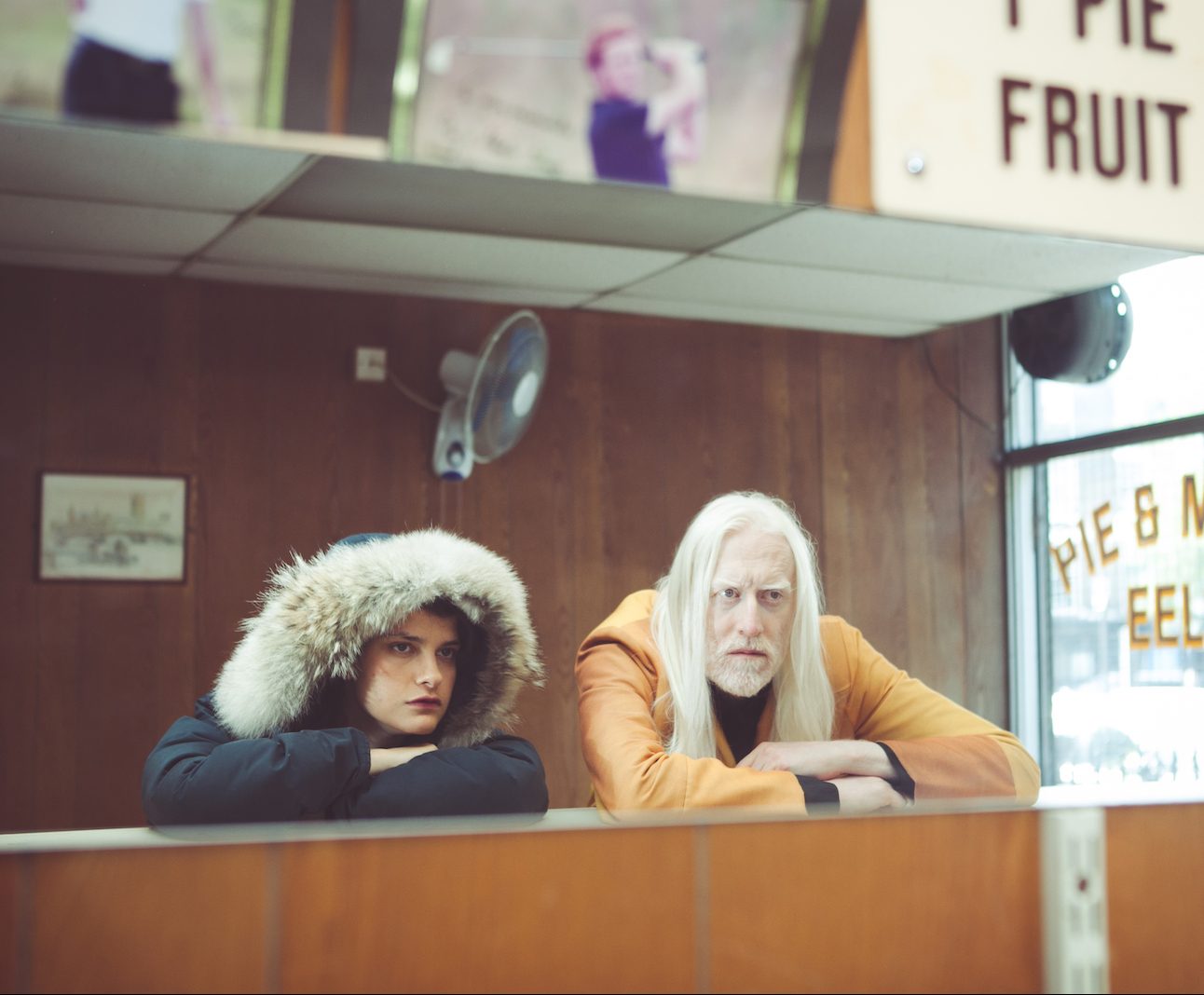 David Wrench and Evangeline Ling – aka audiobooks – threw absolutely everything at their 2018 debut album, Now! (in a minute), a hectic, head-spinning blast of freewheeling freak-pop genius. On its follow-up, Astro Tough, (released October 2021 via Heavenly Recordings), they’ve somehow found a way to ramp things up even further, concentrating their chaotic energy and inherent weirdness into a record that’s bigger, deeper and more powerful than even its predecessor.

Multi-instrumentalist and super-producer Wrench is as comfortable unleashing monolithic psychedelic wig-outs and heavy dub-driven monsters as he is crafting irresistible synth-pop bangers. Writer, vocalist and visual artist Ling is as chameleonic as she is charismatic, able to jump from detachment to rawness to aggression to tenderness to hilarity to toe-curling awkwardness, sometimes within the same song. 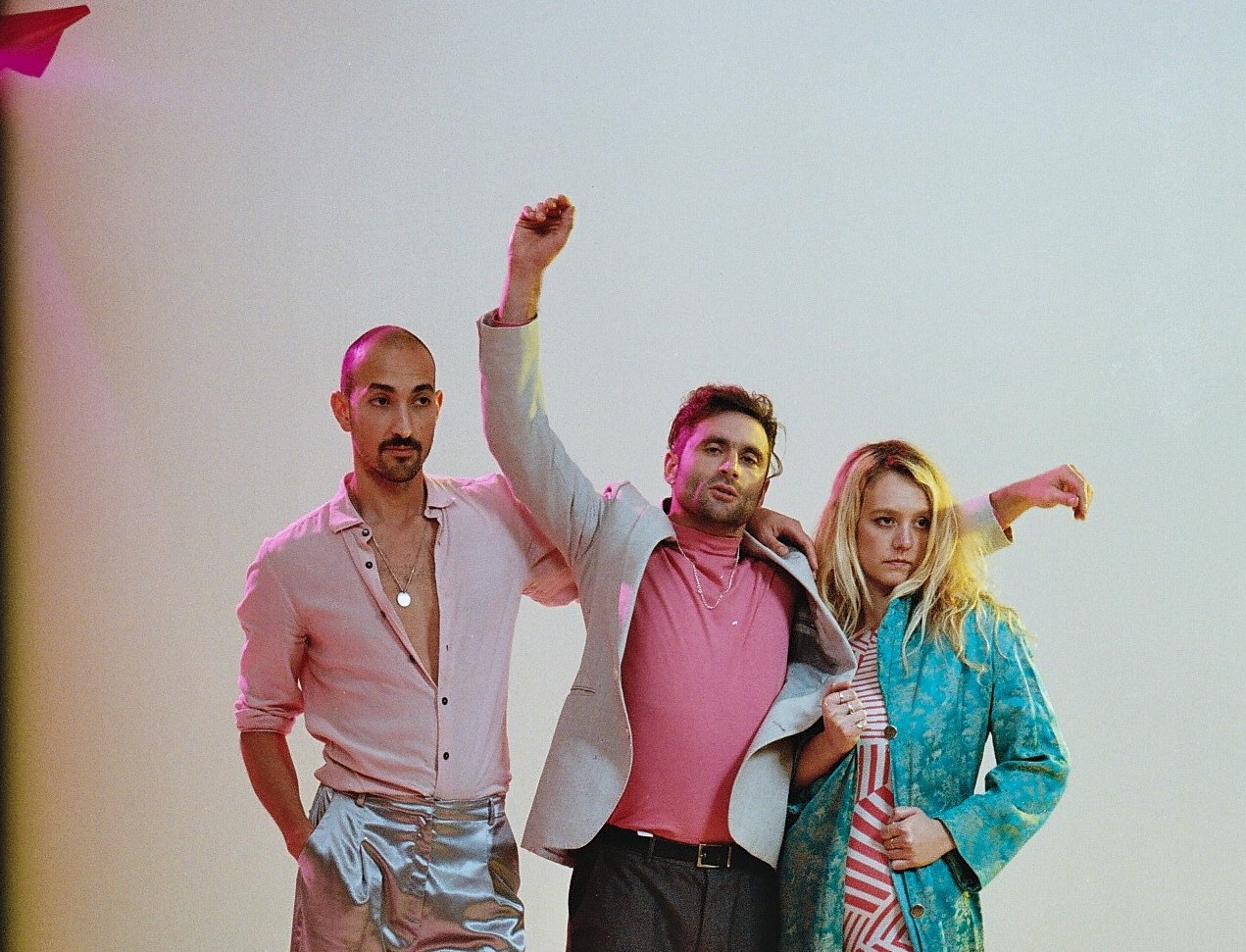 Since releasing their Dan Carey-produced (Kae Tempest, MIA, Hot Chip) debut album on Domino/Double Six in February 2015, All We Are have been lighting up festivals all over the UK, Ireland and mainland Europe with their psych driven atmospheric shows and groove-based anthems.

As their debut proved, the Liverpool three-piece – Richard O’Flynn (drums), Guro Gikling (Bass) and Luis Santos (Guitar) – embraced everything groove based and psychedelic about music, from soul, hip hop to pop music crafting an intoxicating album full of warmth, emotionally astute lyrics and irresistible rhythms. With their second album in the making and drawing influences from post-punk, early 80s/90s electronic music and more, including recent personal observations and experiences, expect a darker, yet brighter, punchier and evermore urgent All We Are filling the void. 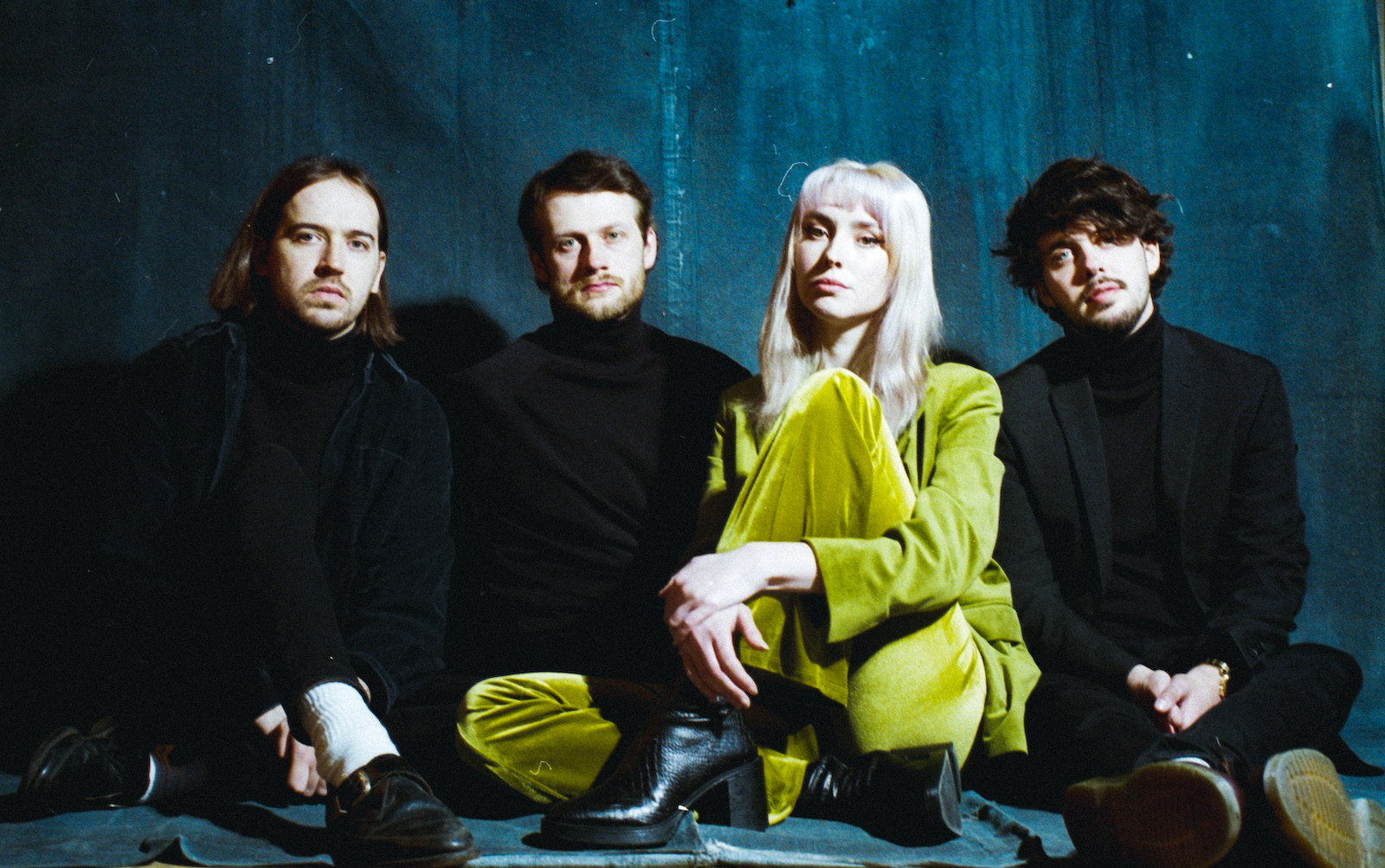 Originally hailing from Buckinghamshire, South London-based indie quartet Bleach Lab are establishing themselves as a force to be reckoned with. Taking the heart-on-sleeve vocals of Julia Jacklin and mixing it with the opalescent soundscapes of Mazzy Star and Cocteau Twins, Bleach Lab have fused their own introspective yet emotionally frenetic soundscape. The band released their debut EP A Calm Sense of Surrounding in March 2021. They went on to be championed by BBC Radio 6 Music after their single Old Ways was featured as Shaun Keaveny’s ‘Track of the Week’ with further support from Steve Lamacq and Tom Robinson. 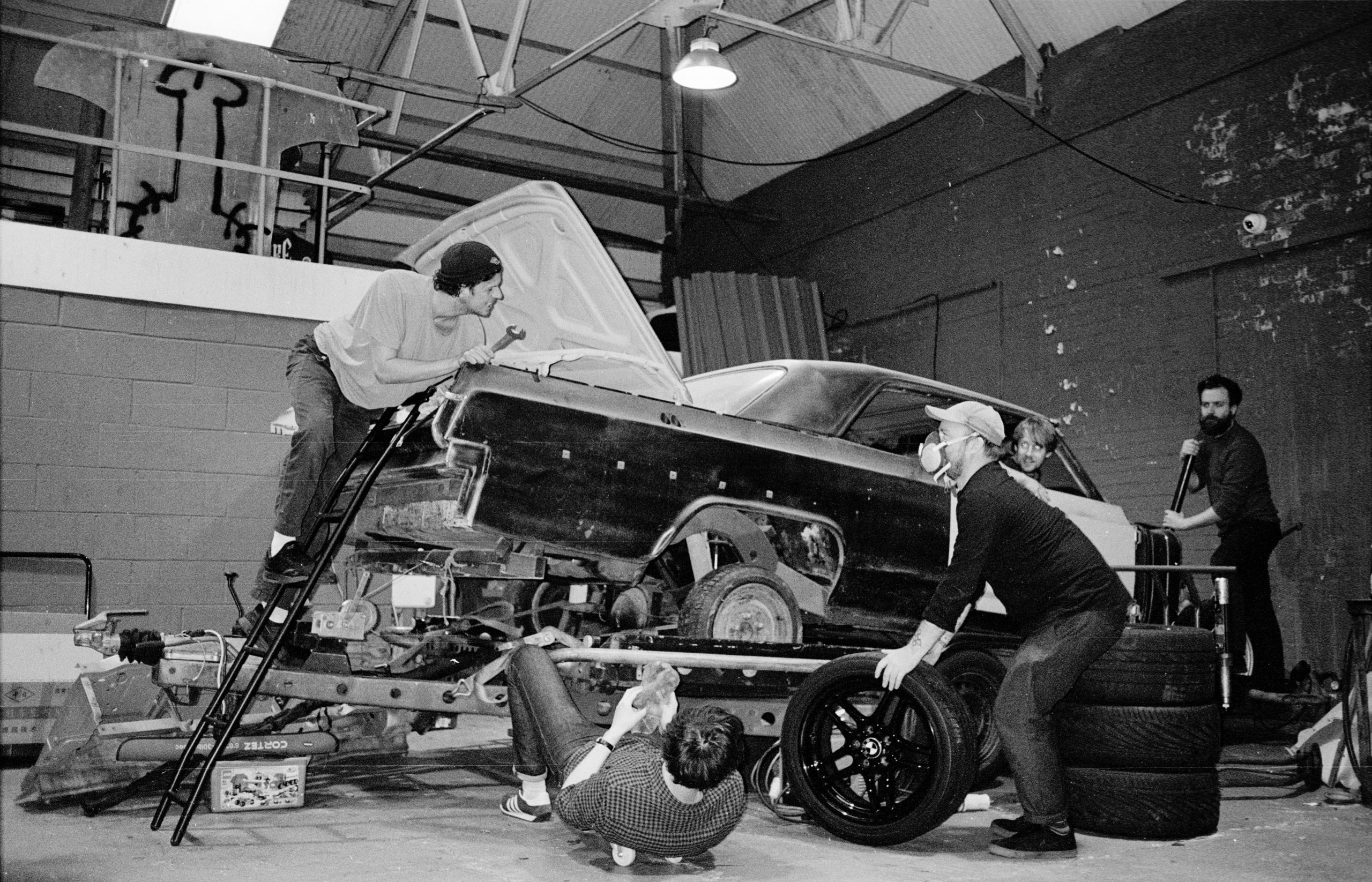 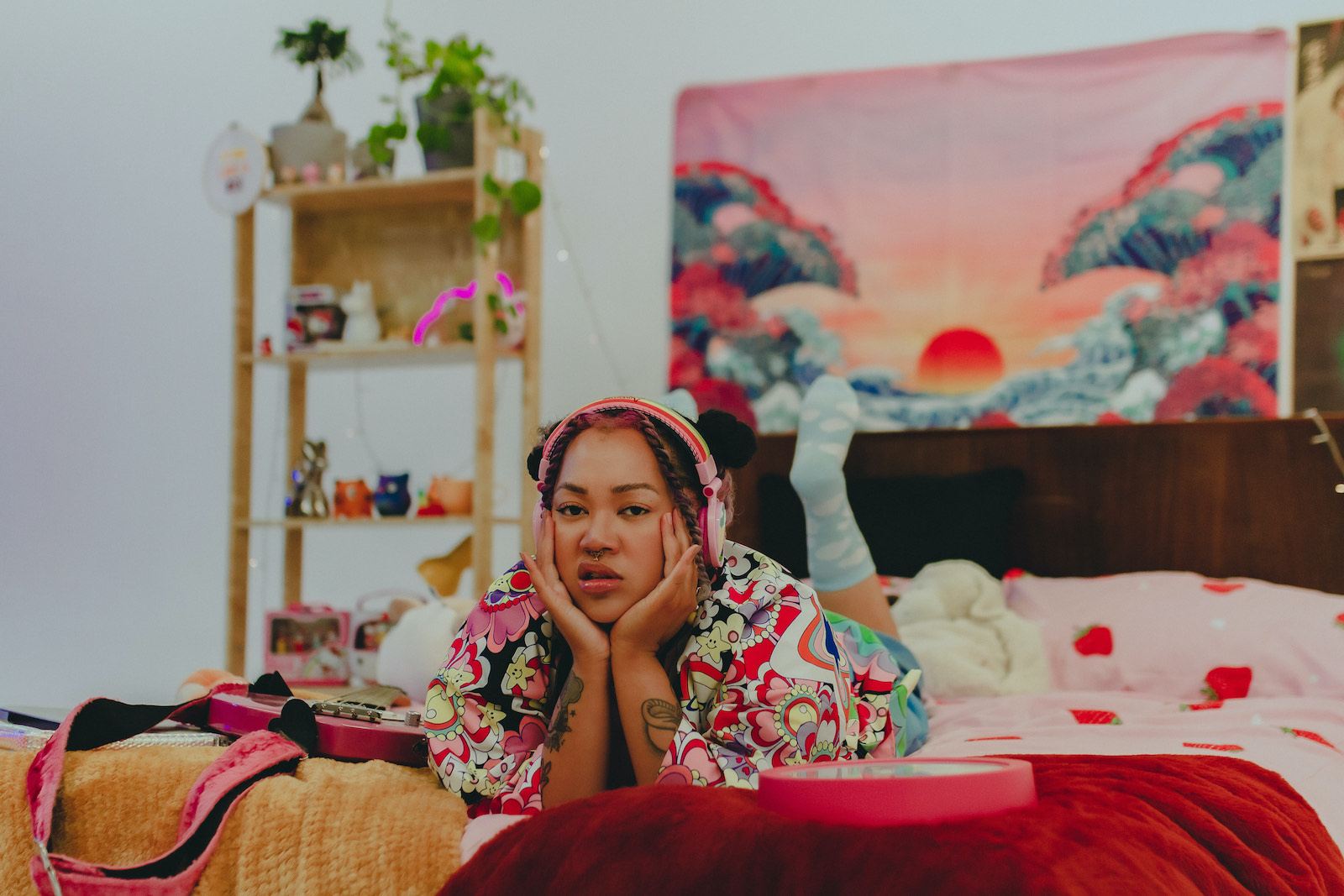 Giving you main character energy, iamkyami is serving glimmer-swirl indie RnB with a side of poly gluttonous punk attitude. Weaponising positive vibes, theirs is an astute, eloquent head on shoulders that just happen to be enveloped in Hello Kitty dungarees and a streetwear edit overseen by Yvie Oddly. Unpacking and exploding the rich opulence of pop RnB tropes, Ky’s signature sound lies in the stillness of the aftermath.

A far-future cartoon landscape dotted with skyscraper-sized themes, where the .zip-file-distortion of pillowy synths wobble in the rising heat of the afternoon and light-headed guitar flurries float by like dust in the sunlight. Raw, honest and with near ninja-like emotional literacy, iamkyami is your slick-talking, perceptive narrator exploring notions of identity, uniqueness and self