The Love Band with Johnny Echols

We are extremely excited to be hosting a three-night residency of The Love Band with Johnny Echols, as part of the 55th anniversary of the release of the seminal Forever Changes album. Original guitarist and founding member of the inspirational, influential 60s group led by Arthur Lee, Johnny Echols, will be performing a different album from Love’s incredible back catalogue on each night of the residency, backed by Arthur Lee’s longest serving band Baby Lemonade.

On Thursday 23rd June the band will be performing 1966’s debut album Love in its entirety; the following night, Friday, sees the band performing the acclaimed LP Da Capo in full (featuring the seismic proto-punk single Seven And Seven Is); and the residency closes on Saturday 25th June with a performance of Love’s signature, era-defining album Forever Changes, a record which not only came to define the psychedelic era but also still resonates to this day.

Each night will feature two sets of music: an album play through followed by a full set of LOVE hits from across the three albums and a selection of deep cuts. A number of invited special guest musicians will be getting up to perform with The Love Band and Johnny Echols on each night, with support artists now also announced (see below for details). All three shows will offer the ultimate Love experience!

On each night Johnny and the band will be joined by the From Liverpool With Love wind and keys section, comprising Martin Smith (trumpet), Oz Murphy (sax) and Jez Wing (keys and strings). These three Liverpool musicians are storied artists in their own right, and all performed with Johnny Echols when he visited Liverpool in 2016 to play live in Sefton Park at the Liverpool International Music Festival (From Liverpool With Love).

There will also be a special In Conversation and signing event with Johnny Echols on the afternoon of Saturday 25th June, prior to Saturday’s show. This event is separate to the Saturday performance of Forever Changes and is ticketed, with a very limited number of places available. 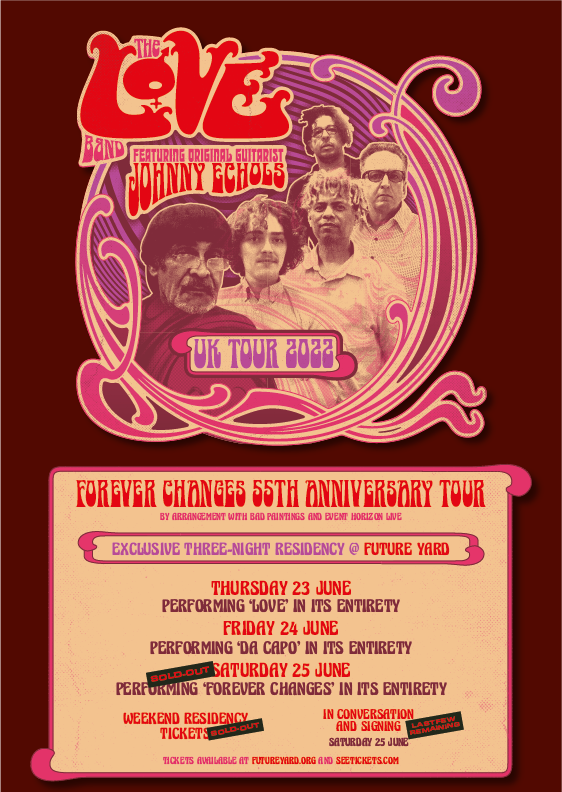 The Saturday 25th June performance of Forever Changes is now completely SOLD-OUT, as are the three-night residency tickets. Tickets for the Thursday 23rd performance of Love and the Friday 24th performance of Da Capo are still on sale. Guest performers and supports for each night have now been released. There are also a small number of tickets reaming for the Saturday In Conversation + signing event with Johnny Echols (separate to the Saturday performance).

SOLD-OUT TICKETS – please be aware of fake accounts selling tickets for the sold-out shows. We recommend using the Fan-to-Fan Resale function for exchanging any spare tickets or tickets you’d like to exchange. Click here to see if there are re-sale tickets available to buy;

with support from Edgar Jones
+ guest performer Edgar Jones + special guest TBA
and the From Liverpool With Love wind and keys section
Play-through of debut album Love, followed by a set of hits and deep cuts. Tickets available here.

with support from Mike Badger
+ guest performer Mike Badger
and the From Liverpool With Love wind and keys section
Play-through of second album Da Capo, followed by a set of hits and deep cuts. Tickets available here.

with support from Elkyn
and the From Liverpool With Love wind and keys section
Play-through of seminal album Forever Changes, followed by a set of hits and deep cuts. SOLD-OUT

LOVE with Johnny Echols make a return visit to the UK in 2022 after a sell-out tour of 2019, to celebrate the 55th anniversary of the release of their seminal album, Forever Changes. Following their farewell tour in 2019 the band hadn’t anticipated a return, but as founding member and guitarist Johnny Echols explains, “the unprecedented times in which we currently find ourselves has made us realise more than ever that what the world needs now is LOVE. We have missed playing for our fans in the UK whom we dearly love. How could we turn down the opportunity to come back and do it again?”

Joining Johnny Echols on stage is Baby Lemonade who, from 1993 until Arthur’s death in 2006, performed as his band and became an essential part of the renaissance of LOVE’s music. This iteration of LOVE saw many sold-out tours, as well as back to back Glastonbury performances and an appearance on Later with Jools Holland.

Johnny Echols and Arthur Lee were childhood friends whose families both moved from Memphis to Los Angeles. Teenage Johnny and Arthur teamed up to form the groups Arthur Lee & The LAG’s and the American Four before they formed LOVE in 1965. The classic LOVE line up featuring Johnny disbanded in 1968. Johnny reunited with Arthur Lee in 2005 to perform with LOVE once more.

PLUS
In Conversation and signing event with Johnny Echols on the afternoon of Saturday 25th June (separate to Saturday’s live performance). **LAST FEW TICKETS AVAILABLE

Tickets for all three live performances available individually. The In Conversation event is also ticketed separately, priced at £10.

Tickets available online in advance. Future Yard is a cashless venue – all payments are taken by contactless or chip and pin. Live curfew 11pm.
If you have any specific access requests, please read all of the details about accessibility at Future Yard here.