We’re made up that November’s Divinity night features a double header of incredible live performances. Tokky Horror – the electro-punk trio who released their debut EP on Alcopop! Records – and autodidactic Bristol-based producer and vocalist Grove are heading up the bumper event on 11th November. Other dates on the tour have been selling out at an incredible rate, so we’re expecting a serious crowd in for this show.

Birkenhead’s monthly rave returns for its fourth edition of celebrating the Messyside sound. Expect a multi-genre night ranging from the hardest hardcore to jungle breakbeats, bouncing wubs and acid squelch, where you can lose yourself in the psychedelic rush of Future Yard’s immersive light show and the best soundsystem on the peninsula. Live guests, DJs, dancers and performers. God loves Birkenhead! There is only Divinity!
Tickets on sale now. 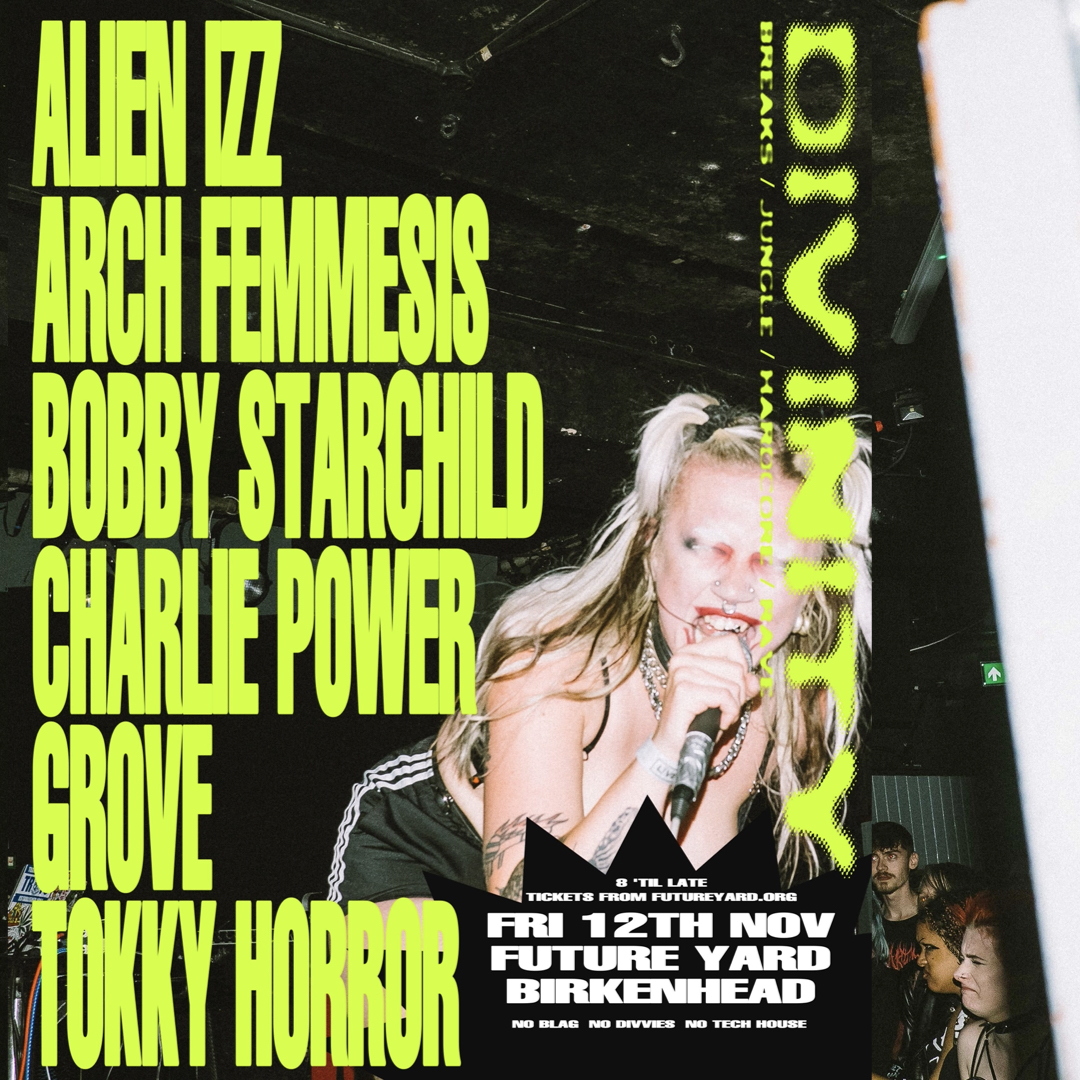 I Found The Answers And Now I Want More is Tokky Horror’s manifesto. Released in May via Alcopop! Records, the EP is the debut offering from the trio of Zee Davine (formerly of pioneering trans punk band Queen Zee), and vocalists Ava Akira and Mollie Rush.

With their forward-thinking, aggressive, punk-attitude-injected electronica, the band are defining their own futuristic landscape of ‘virtual hardcore’ – taking influence from Atari Teenage Riot’s idea of ‘digital hardcore’ and pushing it forward 30 years. Marking a stark change in musical direction from Davine’s former outfit, and inspired by artists like Dennis Lyxzen (Refused, International Noise Conspiracy) and Liam Howlett of The Prodigy, the new material carries on where Queen Zee left off, by crashing headlong into traditionally less diverse spaces and firmly planting the flag for the LGBTQ+ community.

Melding together elements of punk-infused dancehall, jungle, bass and pop, producer/vocalist Grove’s sound is undefined and constantly morphing. Grove’s noise concoctions come from the ‘feminine’ and ‘masculine’ energies that reside within, filtering them through a sensuous and rave-a-licious sound. Lyrical subject matters range from the euphoria of queer rave spaces, to the toppling of the Edward Colston statue.

As a sharp new voice for 2021, Grove released their new EP Queer + Black in February. Queer + Black (Memorials of Distinction x Spinny Nights) is an exploration of identity, both personal and political, and a deft combination of sharp hooks and splintering beats beamed in from a club in 3021 AD.

This show has been rescheduled. All original tickets remain valid for the new date.